The aim of the piece is to first of all provide magical experience and also introduce children(and adult) to different stories and different universes.

“Three Short Stories” will be performed by two dancers and two live musicians and each story lasts between 15-20 minutes. 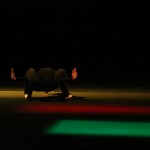 The first story is about a natural event that occurs in Urubamba in the Andes Mountains (Perú) every year. The Nina-Nina (giant firefly) lays it’s eggs inside the Apasanqa( Tarantula) and the Apasanqa carries this eggs until the little Nina- Ninas are born and the life of the Apasanqa ends and evaporates into lights. 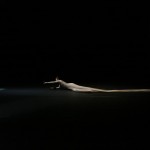 The second story is inspired by a myth of the foundation of Warzaw (Poland). According to a legend, one day a Mermaid swimming in the sea stopped on the riverbank near the Old Town of Warsaw to rest. She found the place so admirable that she decided to stay. Local fisherman noticed something was wrong but they fell in love with the Mermaid upon hearing her sing. Later, a rich merchant caught the Mermaid and imprisoned her, hearing mermaid cry, the fishermen saved her. Thankful to their help, she promised to offer fishermen her help whenever it would be needed. Ever since, the Mermaid, armed with sword and shield, has been ready to help protect the city of Warsaw and its residents.

The last story is a Japanese ancient ghost story, In japan, Yukionnna (snow woman) is a beautiful woman in white clothes who appears in the snow storm and with her icy breathe freeze people to death.

But she can fall in love with a human too, and turns herself into a normal woman and be a wife to the man she loves, keeping her real-appearance secret.

A long time ago in northern mountains in Japan, Yukionnna meet a young and beautiful woodcutter and fell in love with him, she lets him get away with the promise that he will never tell anyone that he met her. she turns herself into a young woman Oyuki and marry him. but minokichi couldn’t keep the promise with the snow woman, and oyuki sad and angry turned back to the snow woman and disappeared into the snow storm.

Even in her happy marriage life, the normal looking house wife oyuki and the icy snow woman yukionnna are two faces she has. Any moment the secret can be revealed and her real appearance will emerge……